JAPAN, Kyoto with Kids – Kyoto, Japan’s “eternal capital,” remains surprisingly timeless. For one thousand years—794 until the Emperor moved to Tokyo in 1868—Kyoto was the capital of Japan.

Now the former center of government bears witness to that history with more than 2000 temples and shrines, but with significantly fewer people and less urban development than the current capital of Tokyo. 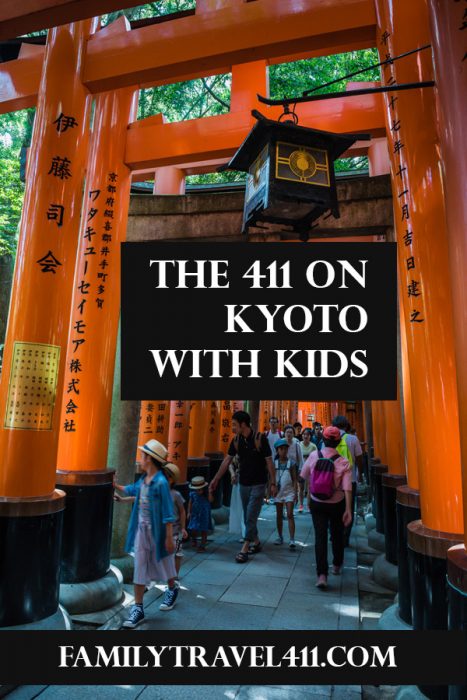 And because so many of these shrines are surrounded by tranquil parks, evergreen gardens, and Zen landscapes, Kyoto is a wonderful destination for exploring Japanese culture with children. Here’s how I suggest you get started. 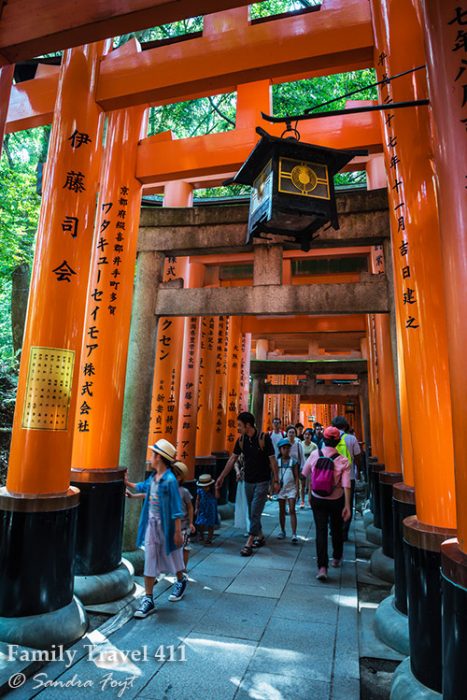 No visit to Kyoto with kids is complete without exploring the gates at Mt. Inari.

Thousands of cinnabar-red torii gates encase a path to the summit of Mount Inari at Fushimi Inari, one of Japan’s oldest Shinto shrines and headquarters for 30,000 Inari shrines in Japan. The Inari are Shinto religion deities of foxes, fertility, agriculture, and industry which explains the many fox statues and sake bales. But there’s no explaining the surreal impact of those gates tunneling through verdant forest—you just have to see it to believe it.

The entire round-trip hike can take 2-3 hours, yet multiple return paths means you can bail at any time. Grab water at the base souvenir shops and keep the kiddos moving with promises of ice cream at the Yotsusuji overlook (about 30-45 minutes up the mountain). If you happen to bring your appetite, there are a couple of spots for a bite as well—including a traditional noodle shop with an amazing city view.

Activity 2: Wander Through a Bamboo Forest 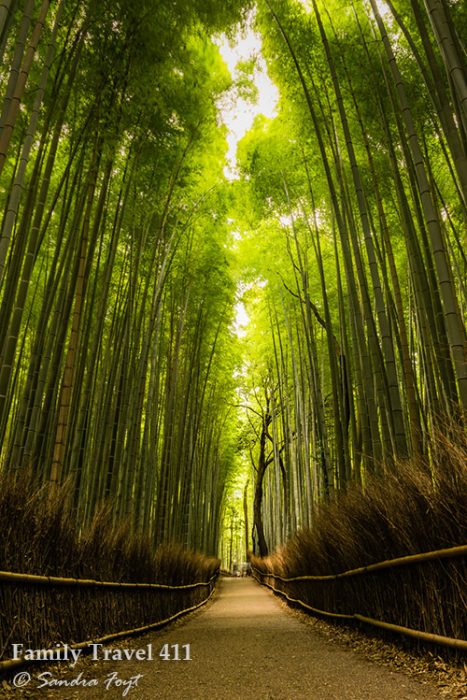 In addition to several temples, the trail passes a traditional Japanese home and delightful gardens at Okochi-Sanso Villa, a curious hermit’s hut at Rakushisha Poet’s Hut, and the hilltop Kameyama-koen Park where, if you’re lucky, you may spot monkeys.

Hire a human-powered rickshaw or rent a bike to travel the path, and if you have time, book a short trip on the Sagano Romantic Train. A short 25-minute ride each way aboard an open-sided rail car passes jaw-dropping scenery in the Hozugawa Ravine.

Activity 3: Go for the Gold 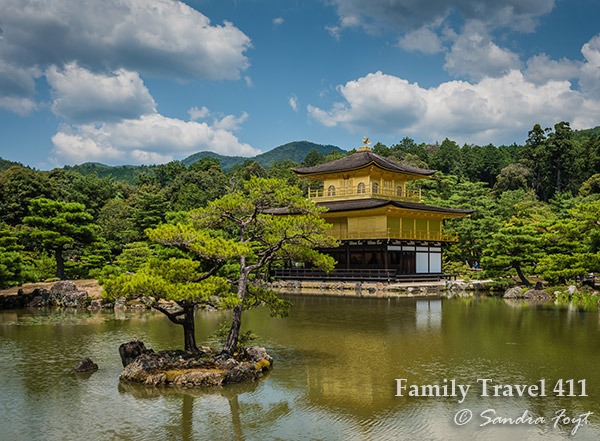 The Golden Pavilion at Kinkakuji.

The main attraction at Kinkakuji, the Golden Pavilion, is without question the Zen temple itself. Pure gold covers the top two floors, and the entire building literally glows on the edge of lake. Strolling the grounds is quite pleasant, particularly if you include a stop at the garden teahouse for Matcha tea and gold leaf adorned Kinkaku sweets. Do pack coins to have on hand for tossing at pots and statues; it’s reputed to bring good fortune. 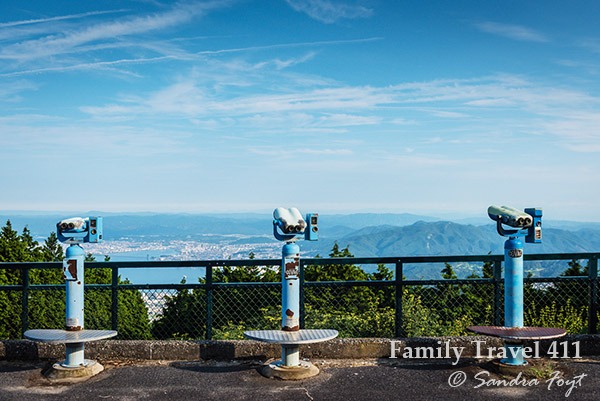 Traveling to Enryakuji Temple, a UNESCO World Heritage site known for its “marathon monks,” can be an adventure in itself. The temple is perched amidst pine trees at the top of Mount Hiei, and while you could take a bus directly from Kyoto, you’d miss the thrill of riding gondolas and funiculars. Instead, take the city subway to Eizan Electric Railway, and connect to the Eizan Cable and the Eizan Ropeway. Both offer incredible views, culminating in the sight of Kyoto and Lake Biwa when you arrive at Hiei Garden Museum.

The gardens are a bit of a surprise as they replicate impressionist painting such as Monet’s Water Lilies series. You soon catch on as replicas of the original paintings are posed next to the gardens. Head to the opposite entrance to catch the shuttle to Enryakuji.

Tip: You might want to save exploring the garden until the return as it closes later than the temple.) 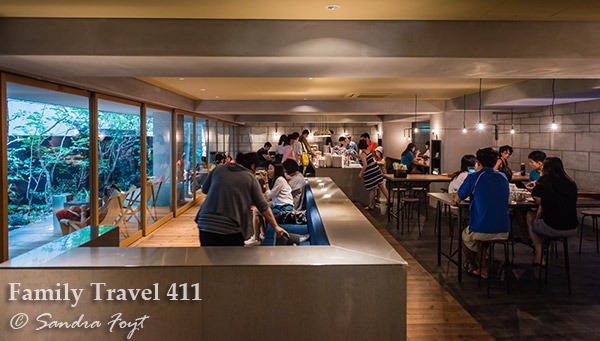 The kitchen and dining area at Piece Sanjo, Kyoto.

Stay where Japanese travelers stay, at a traditional Japanese “ryokan” recently reimagined (as of July 2015) as a boutique hostel. The stylish update includes a variety of room types (from family suites to dormitories,) garden-facing dining/kitchen area, laundry room, and an onsite independent coffee shop.

Check the bulletin boards for current festivals and other fun things to do; English-speaking staff will direct you. Bike rentals and airport shuttles are available (for a fee.) Best of all, Piece Hostel Sanjo is conveniently located in Kyoto center within walking distance from many attractions, restaurants, and great little shops. 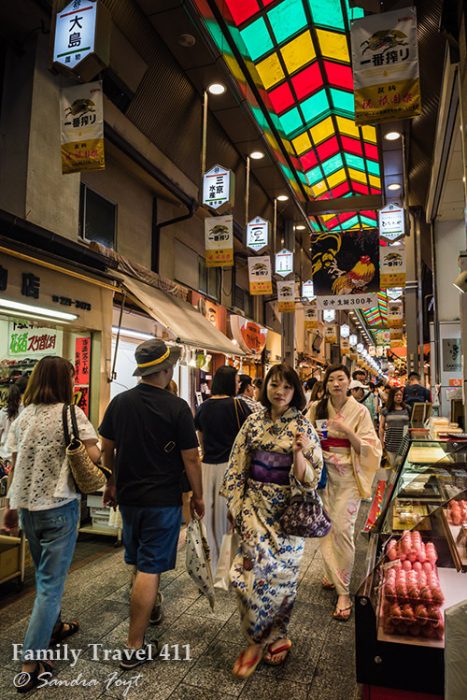 Dining in Kyoto with kids is easy at Nishiki Market, a 400-year-old “food court.”

Nine Amazing Family Vacations Abroad + Tips for When You Get There

Ten Things You Should Always Pack for Travel

The Best Travel Purse for a DSLR Camera I’ve Found

Sandra Foyt is a storyteller and photographer. She is the founding editor of Albany Kid, a blog about enriching family travel, and co-founder of Getaway Mavens, a turnkey destination guide to the Northeast. A former education advocate and enrichment coach, she lived in Buenos Aires, Puerto Rico, the Virgin Islands, Washington, D.C., New York City, and Southern California before settling in Northeast New York. Nowadays, she stars in her own version of “Where’s Waldo?” on serendipitous trips in the US, Caribbean, and wherever adventure beckons. Follow her on Twitter: @SandraFoyt, Instagram: Getaway Mavens, and on Facebook: Getaway Mavens.

The Best Travel Purse for a DSLR Camera I’ve Found

Whale-Watched on the Sea of Cortez

I’ve been reading a lot about Kyoto recently and every article I read just makes me want to visit all the more. We’re hoping to get to Japan for the next Olympics and will definitely head to Kyoto, it looks wonderful!

Wow! Looks fascinating! The bamboo grove looks so peaceful it makes me want to roll out a yoga mat right there on the path.

So much outside goodness! I’ve always wondered about the gates and never realized they would take as long to visit if you did the whole thing. 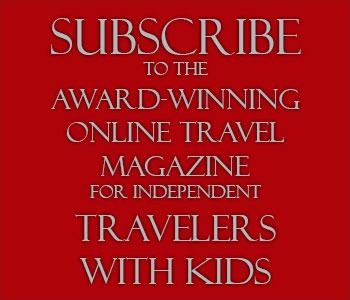